JavaOne is in full swing once more in San Francisco, and one of the highlights is always the technical keynote where Mark Reinhold rallies the faithful, shares some of Oracle’s plans and always likes to pull some surprises…

Some parts of the talk deserve an article on their own, so I will try to give you a summary and a feel for what happened in this article.

This year the technical keynote was back in one of the big Moscone halls (the rest of JavaOne conference is still in another part of town) which provided a lot of space.

The first part of the talk was a summary of where we are now. Java is still the number one developer platform and to maintain this, it needs to evolve while remaining to true to the qualities which it embodies (code clarity, readability, portability, etc).

There is a weekly build of Java 8 available which is feature complete and Oracle wants people to try it, break it and report back.

The main part of the talk consisted of a series of linked demos round a ‘chess’ theme which allowed a display of all the key technologies in Java with different teams on stage.

First we had a Chess game running as an HTML5 client on IPad.

The code was written in NetBeans, which could also be used to debug the code running on the IPad. You could even edit the DOM in NetBeans and dynamically see the changes.

The server end was running on GlassFish 4 which was handling all the interaction and requests.

The FX team had built their own tablet (the ‘DukePad‘) using a Raspberry FX (they have posted all the design schematics on the web) running a standard version of Java 8 build. 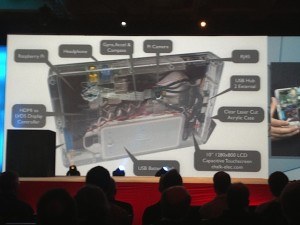 They had a JavaFX client running on it with neat animations and pieces being ‘stomped’ off the board when taken. All the pieces were designed and animated in Maya and the data imported into JavaFX.

The JavaFX team also commented during their demo that they had added printing to JavaX and there is a new component so you can embed Swing inside JavaFX (expect lots of demos this week with this).

The Raspberry Pi has a very slow processor/memory (about Pentium II speed), although its GPU is very good and it was impressive (until they showed another Chess client running on a modern i7 Mac). 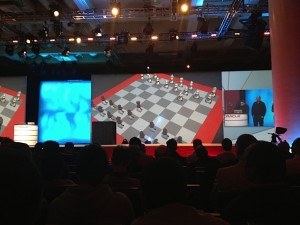 The final chess ‘client’ was a robot arm which moved the chess pieces on a real board – controlled by a Pi running Java. 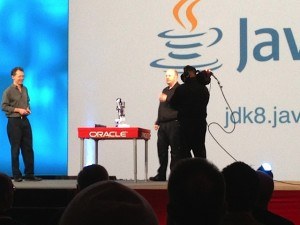 Mark Reinhold finished by talking about Java 9 and Oracle’s ideas for this – making use of GPUs for processing (Project Sumatra), Reificiation, Jni 2.0 (“accessing native code from Java should not be this hard”), and more memory efficient data structures to help with big data.

It was a great presentation and I was left with the feeling Java was moving forward and left most people I talked to feeling very upbeat. Looks like ‘check’ from Oracle…

If you want more information on JavaOne 2013 and further coverage of the entire event check out our JavaOne 2013 Series Index, which covers everything that is happening and is constantly updated, keep checking back for new info!

Mark Stephens Mark has been working with Java and PDF since 1999 and is a big NetBeans fan. He enjoys speaking at conferences. He has an MA in Medieval History and a passion for reading.
« Developers guide to PDF fonts
6 Must Have IDE Plugins Featured at JavaOne »