Is the PDF file format Open and Free? 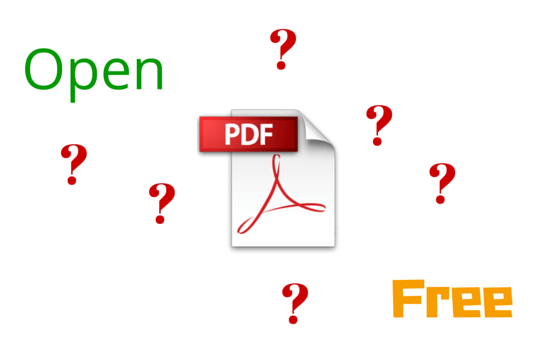 One of my pet annoyances on forums is the number of people who think that the PDF file format is a proprietary format. So let us set the record straight…

In the early mists of time, Adobe created the PDF file format. They created a new version for each new release of Acrobat (and added new features which would be supported in Acrobat). Unlike many other Companies who tried to keep their file formats closed and stop anyone else using them, Adobe wanted to encourage third-party developers and made the documentation available.

The format was made available as a book (which steadily grew in size with each release) and online free of charge in PDF file format (naturally). I remember first buying the 1.3 release when I started writing JPedal in the late 1990s.

Adobe wanted a PDF ecosystem to develop so you could use the PDF file format without having to pay any fees to Adobe. Lots of people implemented commercial and Open Source tools to make use of PDF. The writers of IText, Ghostscript and many others rapidly added PDF in a virtuous circle which saw the popularity of the PDF file format explode.

In 2008, Adobe decided that the format should be an Open Standard and relinquished control of the PDF file format to ISO (the international Standard Organisation). Anyone can join and anyone can make suggestions on what should go into the next standard. As an Open Standard, ISO now charges users to access the documentation (which is how ISO pays for the process).

The task of promoting and directing the evolution of PDF is now overseen by the PDF Association (which includes an increasing range of Companies with an interest in PDF including the obvious ones (Adobe) and an increasing number of more ‘surprising’ ones (Apache, HP). The PDF Association provides the forum for discussing and reviewing the new versions of the standards (IDRsolutions is a member of the PDF Association and helped with the peer review of the new PDF 2.0 File Format).

So the PDF file format is now a totally Free (as in air) and Open format, and proving more popular than ever. Spread the word…

Mark Stephens Mark has been working with Java and PDF since 1999 and is a big NetBeans fan. He enjoys speaking at conferences. He has an MA in Medieval History and a passion for reading.
« How to use the Microsoft Azure cloud on the NetBeans IDE
6 Cool Fun Projects and Star Wars to do with a Raspberry Pi Zero »

One Reply to “Is the PDF file format Open and Free?”