An introduction to Java 9

Here at IDRSolutions we spend a lot of time writing code in Java, and we are very excited about the release of JDK 9 which is coming soon. We already run a daily test to make sure that our code builds on Java 9, and since April 2017 the minimum requirement to run our products has been JDK 8.

At the time of writing the General Availability release is set for 27th July 2017 and you can already download the early access builds to test your code on. We thought it would be useful to write a series of articles explaining some of the new features in Java 9. In this article I will introduce Java9 and we will spend the rest of the month introducing you to some of the features of Java9.

Java 9 is a major update to Java, which brings the language up to the state of development (hardware, technologies, methodologies). It allows Java to make better use of more modern hardware and fixes lots of gaps in Java. It consists of several big features and a whole host of incremental improvements (many of which will be critical to certain Java developers). If it has a theme, I think it would be keeping Java relevant as a premier development language of choice in 2017 and beyond.

The big new feature for us is the introduction of proper modularity with Project Jigsaw. This will improve performance and security. This has taken several Java releases to appear!

Then there is the long-awaited HTTP/2 support. Up until now we have had to make do with HTTP/1 which was introduced in 1999 – the web has changed a bit since then. And of course there is jshell, which will make it much easier for beginners to learn Java.

Do not miss out on all the ‘smaller’ enhancements to Java 9, some of which we will be aiming to bring to your attention this month. There are currently 91 Java Enhancement Proposals listed for JDK 9. Just to give you an idea here is Mark Reinhold standing in front of the full list of features at Java One: 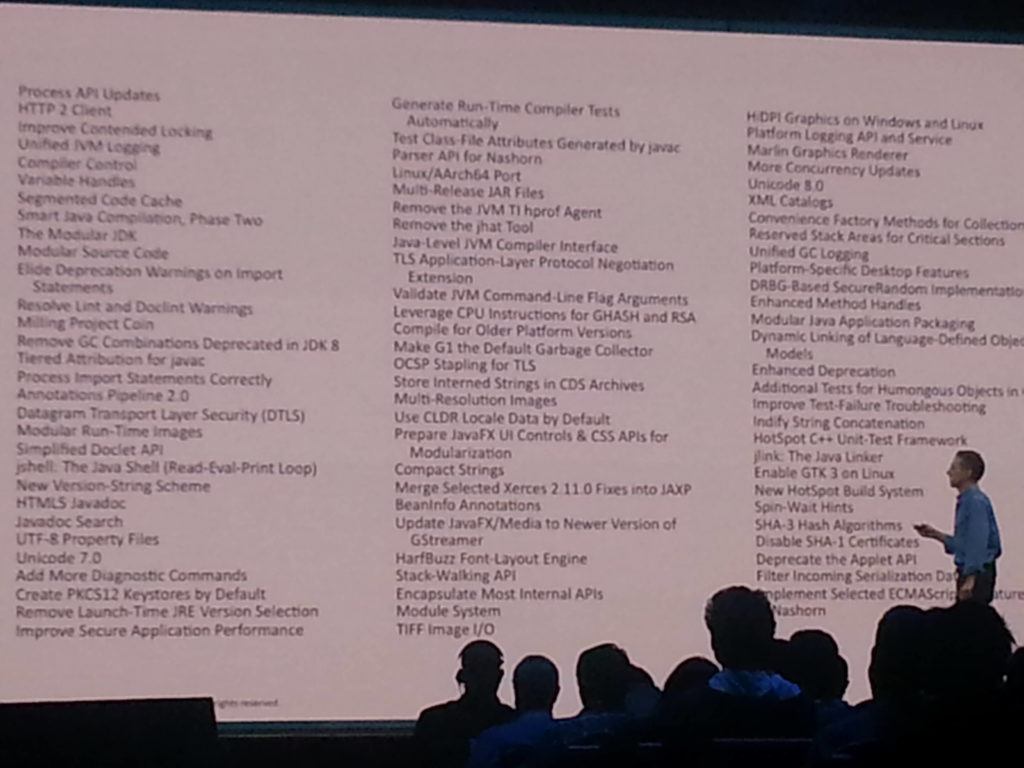 This series will give you an overview of the most important features in JDK 9, and introduce you to some of the smaller and less talked-about ones you might have missed in the long list. First up we explain Java 9 Modularity in 5 minutes.

We got the latest on Java 9 at the JavaOne conference. You can find our notes from the talks here.

Which new features are most important to you?

Bethan Palmer Bethan is a Java developer and a Java Champion. She has spoken at conferences including JavaOne/Code One, DevFest and NetBeans days. She has a degree in English Literature.
« My top 5 NetBeans IDE plugins
Java 9 Modularity explained in 5 minutes »